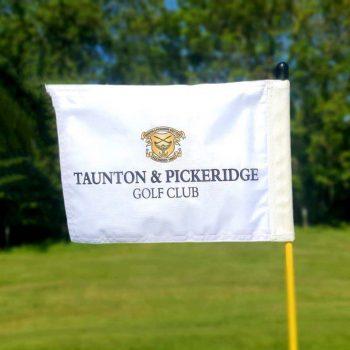 …and even though the guidelines laid down by the golfing authorities are being strictly adhered to, the opportunity to get outside and play alongside friends (socially distanced) is being very much appreciated by everyone.

“It’s times like this that you realize just how much a golf club means to people. The chance to come up to the club and meet up with friends and play golf with them has been a real life saver for some of our members who have had difficult times during this lockdown,”

said Simon Stevenson the PGA Professional and Director of Golf at T&P.

Junior golf on Monday evenings has continued to be hugely successful and despite the break during the lockdown many of the youngsters have reduced their handicaps since they resumed playing.

One former junior who learnt his golf at T&P and now gone onto make his name at a higher level is Tom Sloman.
Last summer the 23 year old, who attended Thurlbeare Primary and Bishop Fox’s School, represented Great Britain against the USA in the Walker Cup at Hoylake, the amateur version of the Ryder Cup and playing for England in the home internationals, after which he turned professional.

Tom was made an honorary member of T&P in recognition of his achievements and during last winter enjoyed success on the Middle East and North African (MENA) Tour, being in seventh place with total earnings of $14k before it was sadly called off because of the onset of Covid 19.

Thankfully the T&P man has been back playing and entering UK based tournaments.

Tom notched up his first ever win since turning professional when he ended 15 under par in the Jamega Tour tournament at Surrey Downs last month.

For the first time in its long history Taunton and Pickeridge Golf Club will have a Lady Captain in 2021 if current vice captain Jacky Ford takes over the top job at the Club AGM.

Jacky has a long association with T&P which started in 1981 when she had golf lessons with Graham Glew, who was the Professional at Taunton & Pickeridge Golf Club.

“He came to the school where I was teaching and delivered an introductory 6 lessons to staff and their partners. My husband and I were hooked on the game and became members of T&P in 1983 and he was Club Captain in 1999. “

Jacky has served on several committees, including Chair of the Club Development Committee, helping with coaching the Saturday Juniors’ sessions and was Ladies’ Captain in 2016.

“To be the first female Club Vice Captain in the 128-year history of the T&P, came as a bolt out of the blue.  It is a great honour and privilege but also a huge responsibility being a trailblazer!  The tradition of the male Club Vice Captain and Captain has been broken and is testament to the forward-thinking of the Club.”

Founded in 1892 and situated on the edge of the Blackdown Hills with wonderful panoramic views Taunton & Pickeridge Golf Club is owned and cherished by it’s members and boasts fantastic facilities.

Taunton and Pickeridge is more than just a golf club it’s a way of life where you will make many new friends and contacts as those who belong will tell you.

However don’t take my word for it, telephone 01823 421790, book a round and go and see for yourself- or why not go along and try their famous Sunday Carvery which has recently returned!